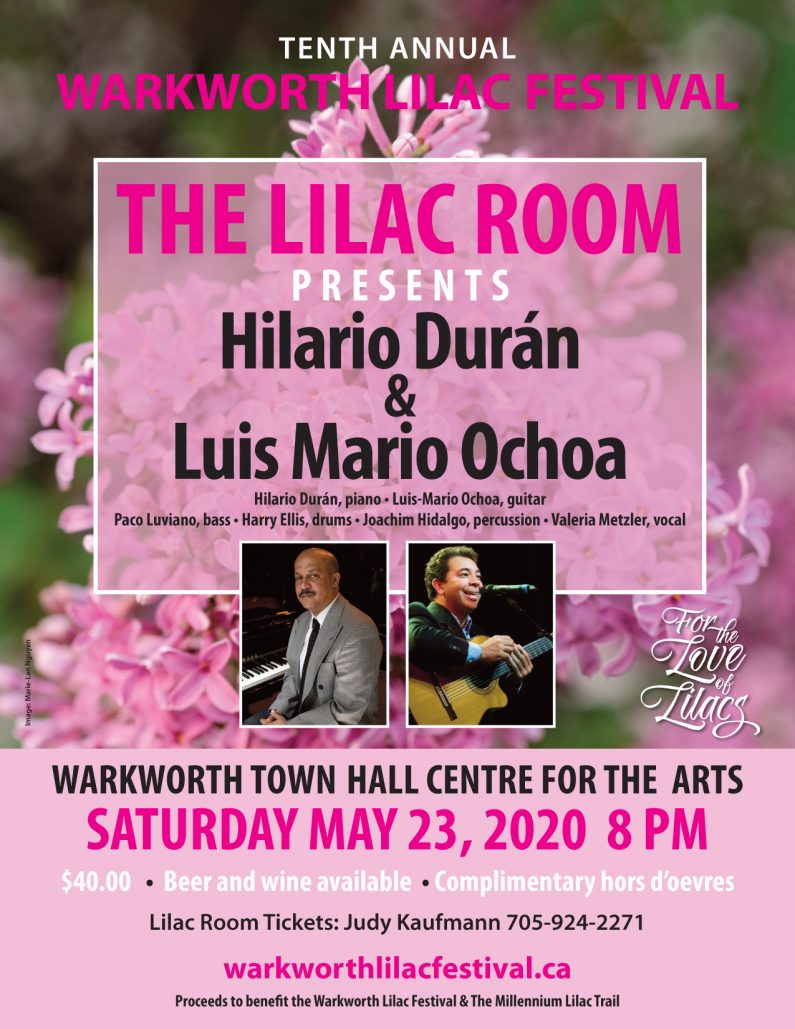 To celebrate the 10th anniversary of the Warkworth Lilac Festival the committee has arranged for a fabulous evening of entertainment featuring Cuban Canadian pianist, composer, arranger & educator Hilario Durán.  Joining him will be vocalist, guitarist, composer, arranger & band leader, Luis Mario Ochoa.  These two musical giants will share the stage with several stellar musicians including percussionist Joachim Nunez Hidalgo and drummer Harry Ellis, vocalist Valeria Matzner and bassist Paco Luviano.  The lineup is incredible; the evening will be unforgettable.  Watch for details regarding ticket purchase and… be warned— there will be a limited number of seats available and these tickets will disappear very quickly. 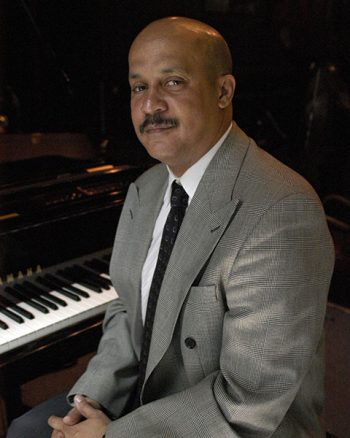 Hilario Durán – hilarioduran.com Cuban born Hilario Durán grew up in Havana in a musical family surrounded by a variety of diverse musical influences on a daily basis. He began working as a professional musician in Cuba’s Los Papa Cun­-Cun Ensemble and in a variety of musical formats. Later on, in the 70’s, Durán was Chucho Valdés’ chosen successor in Cuba’s most modern big band, Orquesta Cubana de Música Moderna.

Hilario Durán toured worldwide and performed with Dizzy Gillespie and Michel Legrand, among many others, as part of Arturo Sandoval’s band where he was pianist/keyboardist, arranger and musical director for 9 years.

Chucho Valdés has acknowledged Hilario Durán as one of the greatest Cuban pianists of the 20th century, calling the Grammy-nominated and multi JUNO-award winner “an unparalleled pianist, composer and arranger of the first order”.

After making his mark in Cuba, Durán continued to hone his skills as a pianist, composer, arranger and musical director of remarkable virtuosity. Since arriving in Canada, Hilario has made a name for himself, he is a multi-Canadian Juno Award winner and nominee; an American Grammy nominee; a multi-Canadian National Jazz Award winner & nominee; and the proud recipient of the 2007 Chico O’Farrill Lifetime Achievement Award, from Latin Jazz USA, for his outstanding contributions to Afro-Cuban Jazz and Latin Jazz.

Cuban-Canadian jazz pianist Hilario Durán is a fixture on the Toronto music scene. Durán immigrated in 1998 to Canada and was named as One of the 10 Most Influential Hispanic Canadians in 2009. Hilario has been named Best Artist of the Year 2013 by the Toronto Musicians’ Association and also as 2014 Best Vision Award Winner (Premio a la Trayectoria) for his work as entrepreneur as a director of his musical company, ES MI MUSICA PRODUCTIONS. He is also an educator at Toronto’s Humber College, acting as a piano teacher and ensemble director.

Hilario Durán has been based in Toronto for the past two decades, but his musical heart and soul have remained closely connected to the land of his birth. He has continued to collaborate with Cuban musicians, but he takes this to another level on Contumbao.  In November 2016, Alma Records’ Peter Cardinali and award-winning engineer John ‘Beetle’ Bailey accompanied Durán to Havana, and the team set up shop in Cuba’s famed EGREM recording studio, the most storied such facility on the island. The cast of musical heavyweights assembled in Havana work their magic on 11 new Durán original compositions. Hilario’s mission is certainly fulfilled here, as Contumbao has an impressive dynamic range of different tempos, tones and moods. 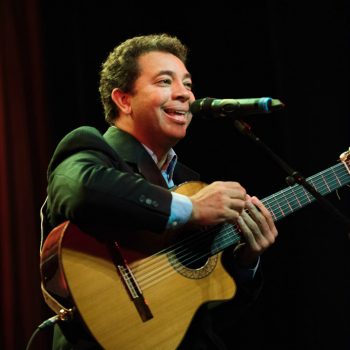 Vocalist, guitarist, composer, arranger and band leader Luis Mario Ochoa was born in Havana, Cuba and his earliest musical influences came from his father, Luis Ochoa Sr., one of the founders of Trio Voces de Oro. Luis Mario began his musical studies at some of Havana’s most prestigious conservatories, completing them in 1987, with a degree in classical guitar from the Instituto Superior de Artes (ISA).

Embracing Toronto as his new home in 1990, Luis Mario soon formed his band Cimarrón, recording three critically acclaimed CDs. His first two – A La Cubana and La Fiesta – were some of the earliest recordings to emerge from Toronto’s Latin music scene and tracks from these CDs were featured in film and television shows such as Traders, the US production Brave New Girl and Canadian production Bailey’s Billions, as well as in the TV series The Associates. His third CD Cimarrón, includes an all-star cast of jazz and Latin musicians from Toronto as well as special guests: Paquito D’Rivera, Guido Basso and Luis’ father.  In 2008, he launched the Luis Mario Ochoa Acoustic Quintet and later that year he released his CD Momentos Cubanos featuring original and classic Latin American songs. The CD reached the # 2 spot on the world music charts at Earshot Canada!

Luis Mario has been featured at most of Canada’s major jazz and world festivals, including Montreal, Toronto, Vancouver, Halifax and Ottawa’s Chamberfest. International highlights include the Barbados Jazz Festival and Jazz at Lincoln Center’s Dizzy’s Club in New York as a special guest of multi Grammy award winner Paquito D’ Rivera.

“With roots in Cuban popular music, Ochoa’s emotive voice and delicate touch on a nylon-stringed guitar, exhibit a change from Latin jazz standards. Ochoa has been hailed for his “…fire, finesse and authenticity” (Jazz Times) and for creating “…high caliber Latin jazz [that] cooks” (Descarg.com).

“Luis Ochoa has an exceptional voice. His soaring tenor rises above the horns and percussion, delivering the lyrics with sincerity and power.”  Jazz Improv Magazine.

Luis Mario recently made Miami his second home and has put together his Miami Acoustic Quintet, which he will introduce to the Miami audience at the WDNA jazz series on October 24th followed by an October 31st performance at the Miami downtown jazz club Le Chat Noir.